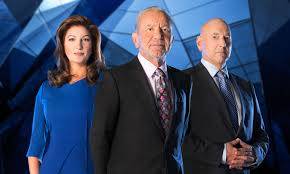 Ah, yes, it’s that time of year again when we celebrate and join in some of our oldest traditions:  the strange outfits, the scary characters, the nasty villains, the knocking on doors and accosting unsuspecting strangers with tricks and treats, the timeless battle between good and evil, between the fear of failure and the promise of reward ….The Apprentice is back on our screens!

This extraordinary programme, described as ‘reality TV’, is now in its 11th series. The first episode attracted a viewing audience of some six and a half million people – high for a Wednesday night.  With a cast of characters that wouldn’t look out of place in the annual pantomime and a script to match – ‘I’m like a Swiss army knife of business’ (oh no you’re not!), this is not ‘reality’, at least not in business terms. In fact, let’s be honest: if any one of these candidates, as they’re portrayed, turned up to be an apprentice in your company, you may well be tempted to send them straight back to school!

The Apprentice is not about business, it’s about television – and it is great television. What it does do for business, though, is bring the whole notion of entrepreneurship into the living room; it’s given commerce a showbiz makeover. Who would have thought that selling a tuna salad could be so entertaining?  Lord Sugar, at once the villain of the piece and the fairy godmother, has become one of the most recognised faces on television and though his rags to riches, market trader to multimillionaire story may sound like the stuff of myth and legend, it is all true. An inspiration to budding entrepreneurs everywhere.

Of course, The Apprentice is carefully choreographed and edited. Nevertheless, each episode demonstrates the importance of team work, good communication and networking. – that’s a reality we recognise and promote through The Boardroom Network. Our monthly breakfast meetings provide a great opportunity for business people in the area to get together in an informal setting to share ideas, experience and information. And none of it is staged! At Boardroom Network events you’ll find the managers, directors and decision makers. They can’t wave a magic wand but they can, and do, make things happen.
Our next event is on Thursday 5th November. An easy date to remember! There won’t be bonfires or fireworks but you can expect to be fired with enthusiasm and ideas. We look forward to seeing you there. The coffee and breakfast will be waiting….