Our lovely summery morning offered energetic and enthusiastic networking, the most interesting hash browns we’ve ever seen, and practical content to inspire us to action.

Here’s what we covered. 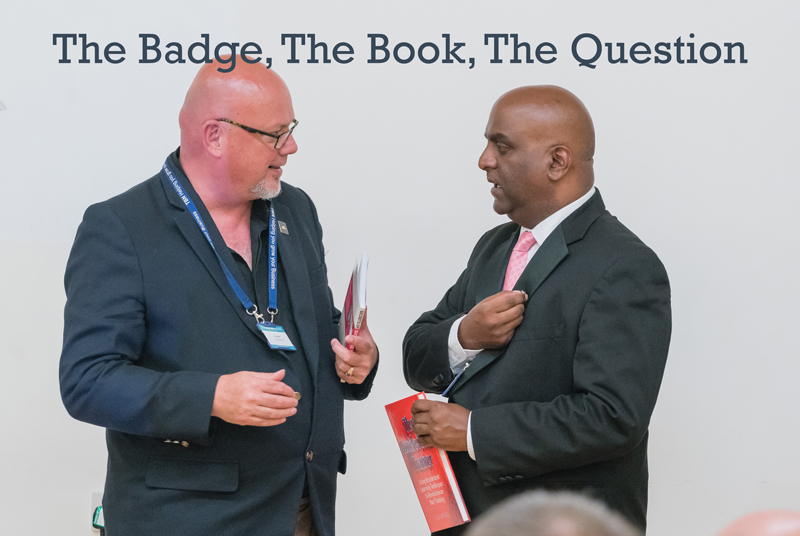 Jay and Lex kicked off our mini presentations with Lex saying, “Every time I tell folks that I am an Introvert…” gentle laughter ripples across the room from those who know me and who finished the sentence in their own minds. But I am an introvert, and having a strategy to ease me into networking really helps.

This is where Kevin Whelan inspired me with his BBQ Method.  With Jay, I demonstrated the strength of Kevin’s three potential points of contact: The Badge, The Book, and The Question.  Humans are able to stand for hours because of three contact points on the sole of each foot – so we did a bit of group balancing to experience this for ourselves.

Giving other networkers these three elements to interact with us makes it easier for everyone. So, wear a badge that ‘says’ something about your purpose, your passion, or your product so that people can ask you about it!

Taking a business book (not your own!) to an event is a great talking point.  Not only does it give you something to rave (or not) about, it also makes you look rather intelligent!  Some business commentators believe that each business book acted upon is worth £40,000 in income.

Then there’s The Networking Question: “If I could introduce you to anyone today who would move your business forward, what kind of person are you looking for?”  The BBQ technique should brighten up any Summer Networking Event!

Big shout out to Jay for not only being MC for the successful event, but for also being my drama partner! 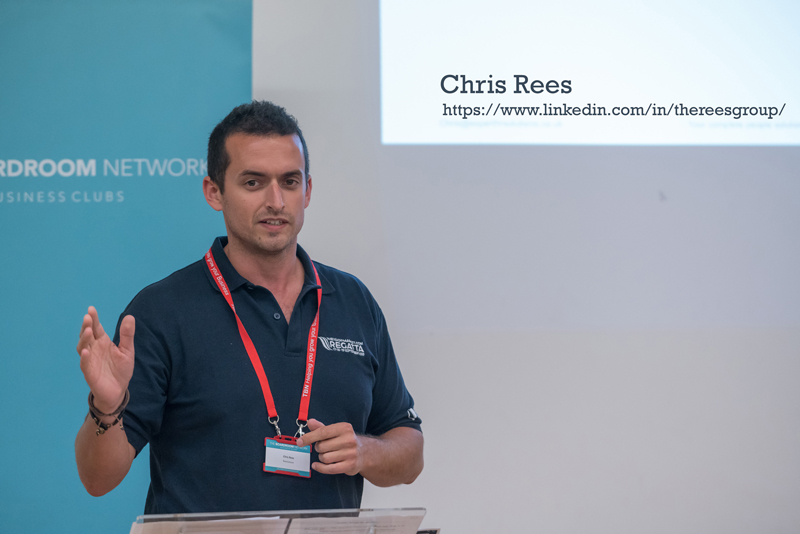 I think Chris Rees was surprised and delighted at the number of people in the room who had some experience of sailing.  Masterfully picking up the BBQ tag, he immediately turned this to his advantage, inviting us to go sailing.  The invitation was particularly interesting for our female members, with a new event to experience real hands-on sailing as part of the regatta.

There’s room for 7-10 people per yacht, so there’s plenty of scope for your network members, your business team, or even your family.

On the Monday, there’s the City Cup – representing your City.  Tuesday is The Women’s Cup – in contrast to a traditional Ladies’ Day in that it’s all hands on deck to race with a passion and purpose.  No spectating, no high-heels, and no glamorous hats for this one!  This is part of the “This Girl Can,” initiative supported by Southampton City Council. http://www.thisgirlcan.co.uk/

On the Wednesday, there is The Property Cup – a bit of Champagne Sailing!  This isn’t normally in guaranteed good weather, but we seem to be lucky this year, don’t we? 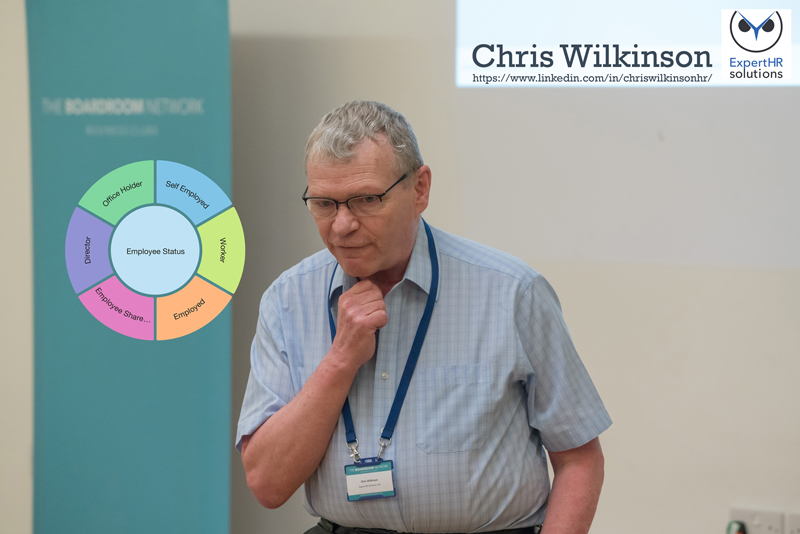 I think I can be bold enough to speak for all of us in saying how grateful I was for Chris Wilkinson’s gift of The Little Red Books!  That was very generous and appreciated.

Chris introduced the most important parts of the team: his wife, Moira – Co-Director, and Ben, the family dog, whose role is as The Benefits Manager.

Of late, there have been some interesting rulings and tribunals – so Chris walked us through how to keep HMRC sweet by ensuring the collaborators in our businesses have the right employment status.

There are only two bodies in this country who can say whether someone is employed or self-employed, and those are HMRC – who want to maximise their tax take – and the other one is a tribunal – a very expensive experience to be avoided wherever possible!

An employee hopefully has a contract of employment, they turn up when you ask them to turn up, and they do the work you ask them to do.  In exchange for the time and value they bring, you pay them, and you pay Employer’s NI Contributions.

The recent ruling on Pimlico Plumbers has been a wake-up call.  The term “Worker” has been around since the 1800s.  Pimlico said their team members weren’t workers, claiming that they were, in fact, self-employed.  However, they were given a van, told where to go, and required to wear a uniform.  No Employer’s NI, no sick pay, no leave… until one had a heart attack. Not liking the fact that he wasn’t getting any sick pay, he took the company to court.

The ruling was that this chap and the other 350 team members held the Employee Status of “Worker.” This has resulted in a back-tax and NI bill for the company for all of them!  There is no statute of limitations so this is going to be very painful since it can be traced back to the beginning of any association!

If you are telling someone where to do the work, and providing any kind of kit, they are almost certainly holding the status of “Worker”!

Self-Employed is clearer – the individual seeks the work for themselves, and takes the financial risk associated with that work.

This is a summary of the other categories that Chris showed on screen though didn’t walk us through in this succinct presentation. 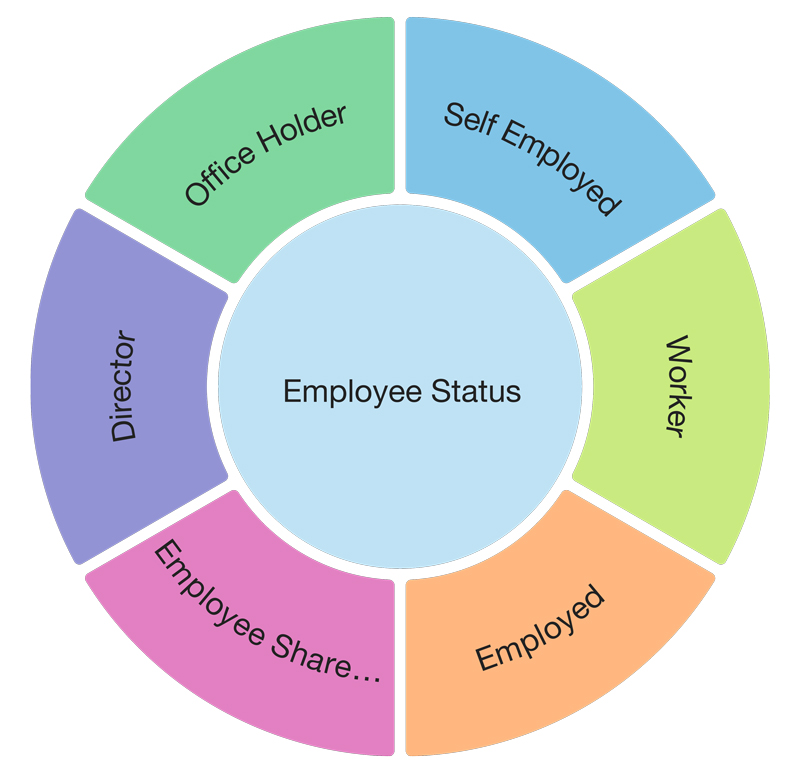 Through Chris’ website and regular workshops, you can be kept on the safe side of employment law.

Push vs Pull Marketing in the Age of GDPR

Our final speaker had to call off because of illness, so I stepped in with a very physical exercise to show the difference between influencing others through pushing them to your desired outcome, or pulling them. 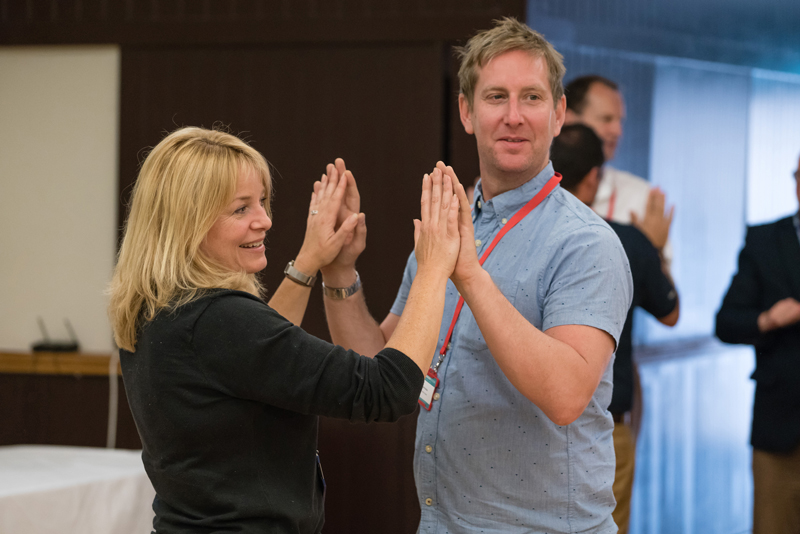 My hope is that those who followed the leader were much more comfortable being pulled rather than pushed.

So, what was the point? The point I sought to make was that networking really isn’t about ‘us’ up front and first of all – people are just too busy to really care.  They want their needs to be met, their problems solved, and their pain to be taken away.  This means that the most effective way to make the most of a networking experience is to ‘pull’ their requirements gently out of those you meet by asking lots of relevant questions and then listening!

The BBQ question was a good example of a pull question: who can I introduce you to, to move your business forward?  Other questions, if you’ve built sufficient levels of know-like-trust include, “What’s are some of the challenges your business is facing at the moment that you think I might be able to help with?”

The bottom line, in business to business marketing, is the great pull question: “How can I make your life easier?”

Thanks for really engaging in the exercises, and we look forward to our next Solstice meeting together on 26th July 2018, 7:00 am – 9:00 am, at The Stones Hotel.

Having written this, this morning, Sam Sharma came to mind.  I hope he realises what an impact one thing he said to me has had:

“Never Coach anyone without their consent!”

My naturally enthusiastic nature and fierce upbringing has led to an ethic where I usually want to help people.  As such, I can sometimes push advice on people who haven’t given me their permission.  It won’t surprise you to realise that I have found this approach to be remarkable unwelcome and ineffective!

Pull is a form of Permission Marketing – as articulated so well by Seth Godin.

“Frequency led to awareness, awareness to familiarity, and familiarity to trust. And trust, almost without exception, leads to profit.”
― Seth Godin, Permission Marketing : Turning Strangers Into Friends And Friends Into Customers

Mark Blunden (sorely missed, I might add) has been strong on the know-like-trust combination to unlock the power of networking.  Frequent attendence at TBN leads to awareness of what you want to be known for and what you stand for.  This awareness leads to familiarity, and that familiarity – to trust.  If we are to profit from networking, let’s pour the energy into getting to know others that they might pull us in the direction they want to go.