I always think that someone who chooses to attend The Boardroom Network shows really good taste!  Today’s breakfast meeting added even more dimensions to reinforce that thought.

Anyone who has ever eaten one of Michael Collins chocolates from Chocablock will know in an instant just how amazing they taste.  Add to this the look of them – customised to display your message – and then mix in the way you feel when you understand more about the way they are made, and BOOM!  They are a sensation!  The proof may well be in the pudding, but it certainly is in the chocolates!

How wonderful then to have Gill Hepburn use the tangible, physical metaphor of different cakes as a sensory-rich way to demonstrate the power of the right financial product to meet your taste!  Genius!

Chocolate and Cake move me to a happy place, but mix in a bit of Golf and a Spa Treatment and it was beginning to feel like a birthday!  George Barry – Business Development Manager at the Dudsbury Golf Club, Hotel and Spa – opened our eyes to the far greater opportunities that this impressive venue offers.

It was my pleasure to remind us of the forthcoming Castle Club by dusting off and then reinventing a marketing model from the 1980s that still has a ton of value.

Now, if you’re hungry for more detail, here’s what happened. 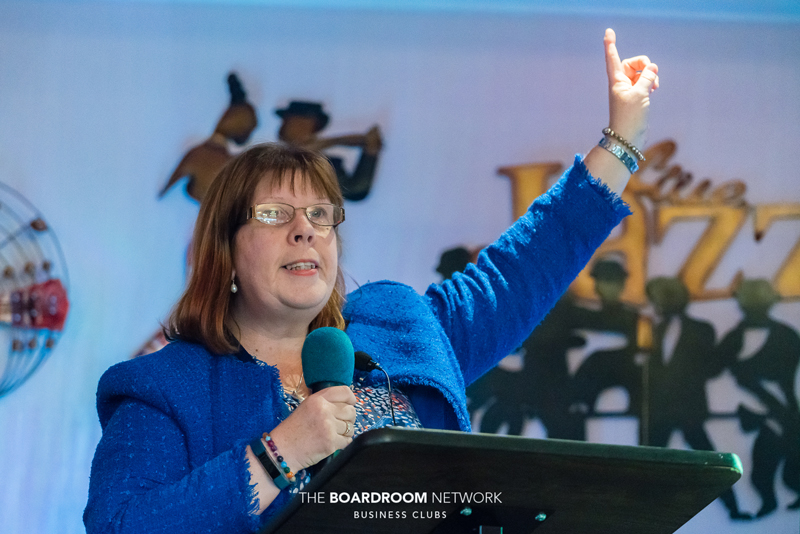 Having Your Cake and Eating It!

First up was Gill Hepburn who clearly demonstrated the authority that comes from a recipe of years of well-chosen experience mixed with loving her job.  Gill is passionate about being able to connect people, and helping them to achieve their life goals.

Reverse-psychology is a wonderful way to engage an audience.  Gill said, “Whatever you do, don’t look!” referring to the mysterious tubs on our tables.  As an aside, this is masterful presenting using two key skills: 1) the aforementioned reverse-psychology (now we really did want to look!), and 2) open-loops.  An open loop is where you start a line of thinking and then deliberately put it on hold to build positive expectation.  Gill did this when she promised us we’d come back to what was hidden and forbidden in the tubs… later!

From a YTS-Scheme start at Lloyds Bank, Gill has enjoyed adding layer upon layer of skills and experience in the financial sector for 33 years.  Over a third of these has been with Station Financial – where she is the ‘face’ of this growing business.

Returning to the open loop, Gill allowed us to lift the lids on the tubs – to look but not touch!  She confessed her life-long passion for making cakes – baking, eating, and publishing!  Yes, Gill has a recipe published in a book, and organises the local Clandestine Cake Club!

“What has cake got to do with financial services?”  Each cake in the boxes represented the type of advice that the firm’s advisors are able to provide…

“It just shows that we’re able to cater for all tastes!” (Cue appreciative groans from the audience!)  “It just goes to prove that with the right advice you can have your cake and eat it as well!”  As well as enjoying a cake on Gill, know for sure that you can have an initial consultation with Station Financial free of charge. 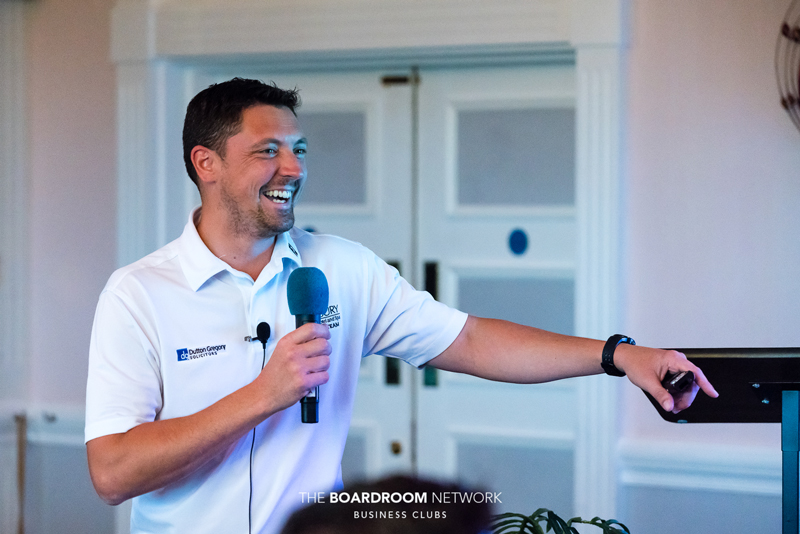 There’s So Much More to the Dudsbury

George Barry – Business Development Manager at the Dudsbury Golf Club, Hotel and Spa – took us through a little of his own personal and professional journey so far.

How did George go from studying Geography at Bournemouth University to developing business for the Dudsbury?  Highpoints along the journey included coaching football in the USA for six months, and then working with Bournemouth Borough Council in the sports development team – which, in turn, introduced him to many different schools delivering PE events.  Off the back of this valuable experience, George started a successful business partnership focusing on training days.  Building this to a business with 16 coaches, the right time came to sell up to Planet Education, thereby paving the way for a new career with the Dudsbury.

TBN is about getting to know people at a deeper level.  Thus, it was great to see images of George’s wife, Nikki, his cute dog, Lola, and then the bonny twins – Molly and Hugo – the picture of a happy family man.

At Dudsbury, George enjoys being responsible for the Social Media.  There are plenty of positive experiences to shout about.  Businesses attracted to the Dudsbury include many local heroes that we recognised.  The Spa is unusual in that it hasn’t been banished to the basement or cellar!  Check out the Conservatory, the new Orangery, and the other function rooms – a wide range of resources to exceed the expectations of any local business.  From weddings to tribute nights, there are plenty of opportunities and entertainments on offer!

Last Summer was a game changer when the Dudsbury hosted a stage of the PGA Europro – lifting its profile Nationally and Internationally.

George is keen to show of a venue he is so proud of, so if you’re up for a game of Golf or a visit to the Spa, send him a message!  (Form an orderly queue now!) 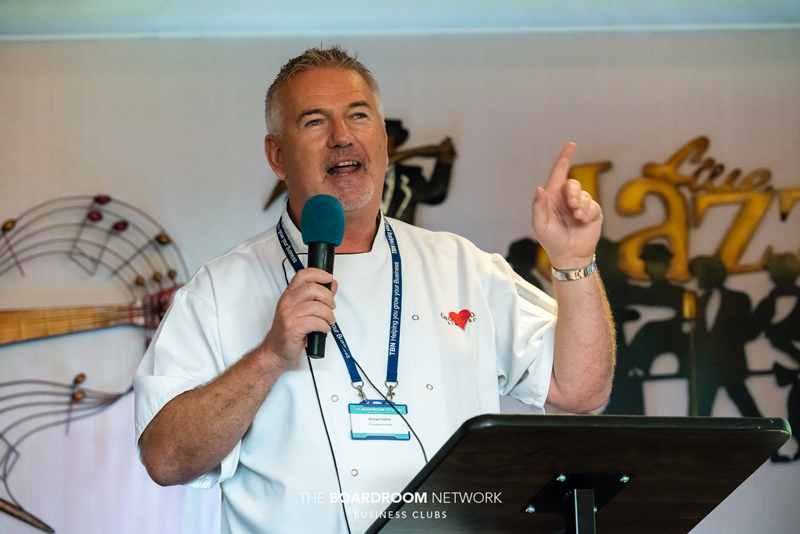 Michael Collin’s reputation as the creator of fine, personalised, hand-made chocolates is well-established.  Being able to brand them with a logo or other message, can really make your business stand out when contrasted with the competition.  Michael’s gift to us today, however, was in his roles as one of the best raconteurs I’ve heard.

Taking us back to the mid-1970s, Michael shared his first attempt at leadership.  As a young recruit in the Navy, Mick was sent to Devonport for five-to-six months of basic training.

Name-changed to protect the innocent, Mick told us about the horrible ‘Corporal Butcher’!  This individual took it upon himself to abuse the recruits in ways within and beyond the imagination.

Michael was the Class Captain, and as the Leader, he decided that Corporal Butcher should be paid back for all the misery he’d caused everyone.  An ambush was hatched where Mick was to leap on the back of Corporal Butcher, pin him down, shout for the lads, and give the bully a dose of his own medicine.  The outcome, of course, would be that Corporal Butcher would then leave the recruits alone.

“That’s a great idea, Mick,” said the other recruits. “We’re all with you!”

Of course, Mick didn’t get the promised back-up and was given a good beating for his temerity!  Sent back to the barracks in disgrace, no one would make eye-contact with their battered leader.

What happen next, however, was fascinating.  Before dawn the next day, Corporal Butcher and his henchmen raided the dorm, armed with pillowcases filled with steel-toe-capped boots.  They beat all the other recruits… except Michael.

After a couple of minutes, the lights are turned on and the unforgettable words are said by Corporal Butcher,

“There you go!  That’s what you get for not backing the leader up!”

Mick thought to himself,

“This man’s Navy might not be so bad after all!”

It wasn’t until the end of the five months of hell that Mick spoke to Corporal Butcher again.  He said, “Thanks for that – all the abuse, the hidings, and everything else… do you think the men will follow me?”  He replied, “Ahhh, they b*****-well might, if only out of b*****-curiosity!”

Mick realised at a young age that however you feel about your leadership, no matter how confident you are, and how well you’ve got your plans in place – might be completely different to how the troops feel! 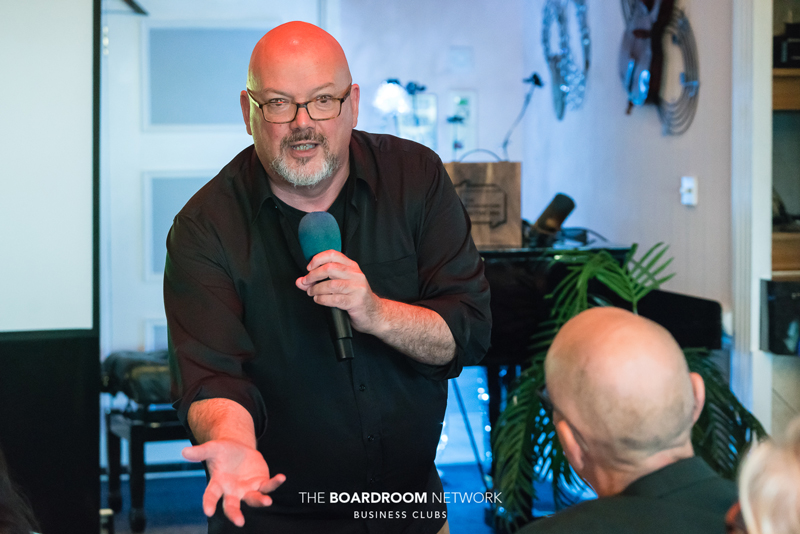 Proof is the Truth that builds Trust

80s Models of Marketing may have (rightfully) fallen out of fashion but my passion for video reminded me of one that has served us well.  It’s called FAB Proof in the trade and highlights the difference between Features and Benefits.

Taking a trademark – Teflon – as an example, I walked us through how the model works.

Teflon is a Feature that can be transformed into an Advantage or Attribute by asking the question, “Which means that?”  This is much more fun when asked in the style of Tommy Cooper!

Teflon, we now know, means that it’s non-stick.  That’s an attribute that clearly has advantages.  To push the attribute into the realm of a Benefit for the end-user, we ask, “So what?”  (Which, when said like Bugs Bunny is also much more fun.)

The answer to the ‘So What?’ is that it is less washing-up!  Traditionally, then, we would reverse our proposal like this: “If I could show you a product that meant less washing-up because it was non-stick – a product called Teflon – would that be of interest?

This is what we call, “Selling the sizzle, not the sausage,” i.e. what a service or product does for the end-user rather than the product or service itself.  Yes, it’s an 80s model rich with clichés like, “People don’t buy Life-Insurance; they buy peace-of-mind,” however I still hear feature-rich one-minute pitches at TBN.

My purpose, however, was to upgrade the Model for the 21st Century Social Media Age.  In the 80s, the last part was ‘Proof’.  It answers the question, “How can I know that?” which we asked in the style of Michael Caine.  The proof is shown through demonstration.  When we show a Teflon-coated pan cooking perfect eggs, using virtually no oil, and being easy to wash up, the point is made.

This brings us back to Michael’s chocolates.  Tasting them is the proof that then means that there doesn’t need to be a lengthy sale – you either like them or love them!

My call to action was to realise that LinkedIn video offers ample opportunity for each of our businesses to show the world ‘proof’ of what our services or products deliver.  Proof is the ‘truth’ that leads to trust.  This can accelerate the path to selling what we do to the right self-selecting customers – customers who choose us.

I concluded with the example of TBN being proof already of the value of networking.  Those who have enjoyed this experience are in a great place to take it one step further with the Seasonal events of The Castle Club.  This is our chance to tap into the growth potential of 90-day sprints.  By meeting in-confidence with a select group of like-minded business professionals, we can hold one another to account on our commitments.

Time and time again this has been proven to be an effective AND enjoyable model for 10x our businesses to the next level of growth.

Responding to the proof…

The 22nd of October is looming – and there are only 30 places – so if you’d like to harness the power of commitment within the context of an utterly gorgeous location, have a chat to Jacqui or Andy Taylor-Whyte.

Here’s a link to the dedicated page for The Castle Club where you can discover more.