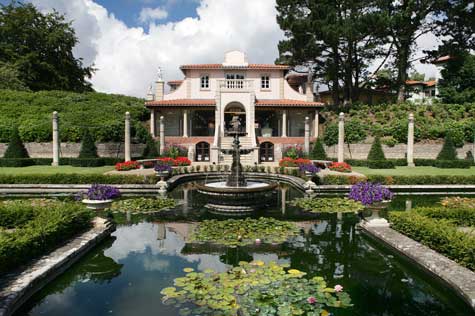 On the morning of the 7th of July, members eagerly gathered for the annual Networking Breakfast and Summer BBQ at the gorgeous Italian Villa, at Compton Acres Poole. Sitting outdoors, surrounded by vibrant bedding plants and magnificently manicured gardens, the location was an ideal setting for the highly anticipated networking event. Leading to its success, we were also pleased to welcome a fantastic turnout of members and local business people.

Although we saw light rain on several occasions, this had no ill effects on the mood of the morning. Facing the reality of a typical English Summer, we moved between the unique Italian Villa venue and visually impressive gardens. Spurring light-hearted conversation, it actually helped to bring people together, uniting business owners together in true, British spirit. Having an indoor escape has certainly highlighted the need for businesses to be prepared for any situation, remaining enthusiastic and adaptable, remains our top networking advice!

Following a truly delicious BBQ breakfast (with exceptional bacon), we welcomed several confident speakers. These included TBN member Ian Thurgood, owner of The Business Explorer. He discussed the balance between me time and money making, asking members where they plan on taking their business in the foreseeable future. Concluding, Ian offered his expertise in streamlining services with dedicated five-year plans.

Next, we saw Sally Anne Tanner from Westover Nissan. She spoke to members about ways for businesses to gain 0 emissions status, with electric vehicles for employees. With her soft approach, Sally helped to teach and educate attendees about benefits of electric vehicles.

Sally was followed by chocolatier Michael Collins from Chocablock Limited. He delighted us all with his recollection on the power of chocolate! In particular, he gave us the story of how he became a chocolatier. As a young lad in the navy, he was moved to make rum truffles to keep the ‘old sweats’, who viewed him like a pack of hungry Alsatians would view a kitten, at bay!

We also saw, the man himself, Tony Beales the owner of The Italian Villa and of Beales Gourmet, speak. He thanked Bernard Merna the owner of the gardens, for opening up Compton Acres to businesses on the morning. He gave us some fascinating facts on the extent of preparations that is needed for the morning’s spectacular surroundings, which included the planting of 8,000 spring bulbs, with 3,000 planted in Italian Garden alone.

We would like to offer our congratulations to Diane Bantten from Acquit Debt Recovery, for winning the day’s champagne! Now looking ahead, we will hope to see everyone once again at the next TBN Business Club Bournemouth Breakfast. which will see us return to the Hallmark Hotel on Thursday 4th August. We shall also be hosting the TBN Solent Business Club next event at the exquisite Solent Hotel and Spa in Fareham on Friday 19th August.  Networking whatever the weather, let’s hope for some summer skies to arrive at last!

Register for any of our upcoming meetings now at www.theboardroomnetwork.com/upcoming-meetings.