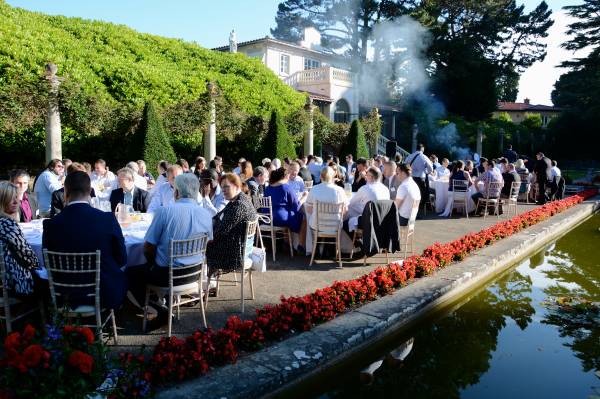 The elegant venue. The consummate hospitality. The gentie setting. The stunning weather. The triumphant turnout. All glorious! Surely there’s no better way to describe the first Boardroom Network BBQ Breakfast event? And our first with al fresco dining.

From the moment we arrived in the car park at Compton Acres, it was apparent that this was shaping up to be a popular event. Even driving to the venue, bright sun, a cloudless sky and temperature of 16 degrees at 6.45am gave a hint of what was to come. Expectations were running high. And those expectations were perfectly met by the airy and spacious setting of The Italian Villa – then exceeded by the view over the Italian garden, already laid for breakfast with crisp white cloths on eleven tables that dazzled in the sunlight.

That feast for the visual senses was matched by the aroma of barbecued bacon as the chefs prepared breakfast for ninety-six people.

Yes, that’s right, ninety-six people – a staggering turnout that immediately lent a sense of occasion to the entire proceedings. Everything fell into place as we drifted past the barbecue to take our tables. Inevitably, conversations were about the beautiful setting and the fabulous weather. By now, at 7.30am, the sun was blazing and jackets were being removed. Those who forgot sunglasses were beginning to regret the oversight.

Simon Scarborough was back at the helm and called us to the barbecue buffet one table at a time. Serving breakfast to almost 100 people takes a while, but that gave us ample opportunity for lively round-table chatting prior to the individual 60-second presentations.

First to the lectern for a Two Minute Warming, assisted by a PA system, was John Russ of WPA Healthcare. John talked about medical insurance in an apologetic way, suggesting that the subject may not be top of everyone’s agenda at 8.30 in the morning. Nevertheless, he reminded us that our health should be a priority. He also holds the NHS in high regard: it is a national treasure that does fantastic things – but not in every respect, pointing out that a £2billion funding gap doesn’t help. This is where private health cover has a role to play. He drew a fine analogy with transport: a private car versus a public bus. (His point probably had resonance as I don’t imagine anyone was able to arrive at the breakfast by bus. Let me know if I’m wrong!) Travelling by bus, you will get to your destination but it will take time, and be crowded and uncomfortable. In a car, you’ll be in control, will arrive when you want to and will be comfortable. But there’s a cost involved. Someone on my table noted that you also get to choose your consultant. Despite the early hour, the message wasn’t lost on us.

After a table swap that looked more like honoured guests wafting around a Royal Garden Party, we repeated the 60-second individual presentations before being addressed by Tony Beales for the second of our Two Minute Warmings. As managing director of Beales Gourmet, Tony was our host and ultimately responsible for our presence that morning. He welcomed us to “his home,” the Italian Villa, pointing out that Compton Acres is not just for ‘old people’ Tony gave us a brief history of Beales Gourmet, explaining that his company took a long-term lease on the villa in 2010. His business has two divisions: Beales Gourmet delivers outside catering and handles 60 weddings every year; and the Italian Villa which caters for 160 weddings and events every year in the idyllic setting we were all enjoying. Tony finished by noting that TBN member Darren Northeast PR is staging an event at the Italian Villa on 16th July.

That proved to be a perfect segue to our final presenter, Justin Cohen of Darren Northeast PR. Justin kindly congratulated TBN on its largest and most sparkling event so far, and talked about the virtues of connecting with business people – the primary reason we were all there. To that end, he announced that his company had just re-launched The Boardroom Network’s Twitter and Facebook platforms. He asked us to look across the eleven tables and to consider the wealth of knowledge and expertise in attendance. The reinvigorated social media platforms are there for us to promote our businesses. If we need help, he’s happy to give it.

An anxious Jacqui then took the microphone and apologised for the overrun of 20 minutes. We were having such a lovely time in the sunshine that I’m not sure any of us really cared. But Jacqui always does! She expressed her delight that 96 people had made the effort to participate and commented that the few no-shows would have taken the number into three figures. She received a spontaneous and well-deserved round of applause. With so many guests, this month’s champagne award for the member bringing the most guests was more of a challenge than usual. However, Jacqui and Holly had represented TBN at the Intrinity business event hosted at the BIC by Smallporate just two weeks previous, and from that had come several new members and visitors. So Jacqui quite rightly chose to award the champagne to Smallporate director Sam Dyer – he of the Michael McIntyre alter-ego last month!

Jacqui wrapped up proceedings with a final incentive for new annual memberships and renewals with a £30 limited-time discount on offer. Contact Jacqui at TBN for further details.

Next month’s Breakfast on Thursday 7th August will be back at our usual venue – the Hallmark Hotel. Jacqui expressed a hope that fine weather may allow us to take our early morning tea and coffee outside in the Hallmark’s garden. Seems we’re getting a taste for this al fresco thing!

Keep the stories and feedback coming. Thanks again. All the best – Steve Chapman of Swordfish, aka TBN Blogmeister.