Leonardo da Vinci believed that everything was connected.  The inventor of Mind Mapping, Tony Buzan, cited this as one of his favourite da Vincian themes.  Because everything is connected, no subject is irrelevant nor person uninteresting.  How fascinating then that our three keynote speakers demonstrated so clearly through their diversity that every connection was relevant to our success.

And an entrepreneurial appeal from Russell Thackeray broadcast the potential of member to connect with member in making his new business the outstanding success it undoubtedly will be. 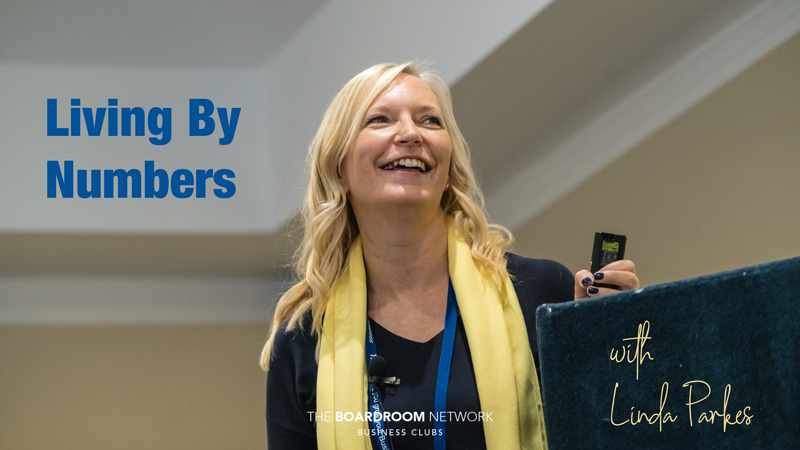 Many business people have a relationship with their figure work akin to most other people’s relationship (or lack thereof) to their pension updates (the one’s the file in the draw without looking at them!)  Linda Parkes is passionate about making the numbers work for you.  There’s a great distinction though since through Linda you can ‘know’ your numbers without having to ‘do’ your numbers.

Every entrepreneurially thinking business professional must understand the numbers, and not just at year-end.  For those of us who are not naturally drawn to a working-relationship with our week-by-week figures, help is at hand.  A connection with Linda gives us a connection with knowing the numbers in a way that is tailored to our thinking style.  Linda is the interface that suddenly makes the power of numbers accessible.

Engaging the audience with some surprising facts, we learned that 40 degrees is the connection point of the Centigrade and Fahrenheit scales.  We discovered that in a room of 23 people, there’s a 50% chance that two will share the same birthday.  And in the Western World, there’s a strong preference for the number seven when asking any audience their favourite number between 1 and 100 (almost 10%). 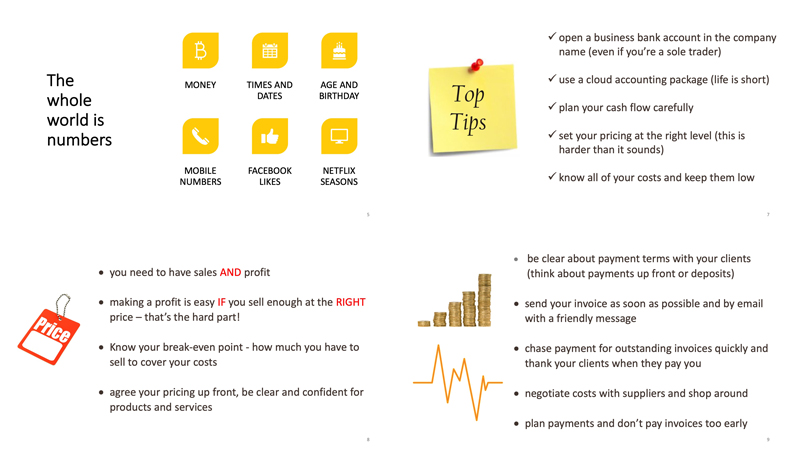 Linda shared 14 key recommendations that I’ve shown in the slides, but my recommendation is that you connect with Linda over a coffee and discover how she can get you living with numbers! 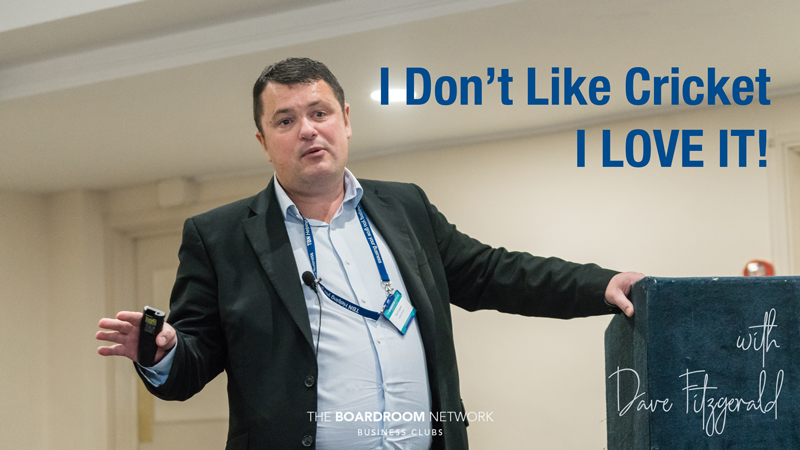 Dave Fitzgerald has transitioned from thirteen years as a civil servant and eleven years at J P Morgan (with a role that took him all over Europe) to a pivotal encounter with a Careers’ Advisor.  Explaining his family and financial commitments, the advisor suggested he resign immediately his current position as an events’ organiser and presenter of sporting events.

Here’s a showreel of a day in the life of a Lashings event.  Everyone who plays for Lashings is an International Cricketer, and part of the role includes coaching children.  The events include a Marquee lunch, corporate entertainment with two MC Comedians, Q and As with the Cricketers and Commentators – all to raise money for the clubs and the charities they support.  The finale is a 20-20 Cricket Match against the local side, with the odds strongly in the favour of the Lashings team!

Best known as, “The Harlem Globetrotters of Cricket,” Dave retold the story of Lashings rise from the ashes of initially humiliating defeat.  The former CEO of Lashings Bar was challenged to field a team for a match against the players from another local bar in Maidstone.  Bar One scored 329 runs without being bowled out, and the Lashings team were bowled out for a score of 29!

The CEO declared that this would never ever happen again!  He turned up the following year with Ritchie Richardson – recently retired as the Cricket Captain for the West Indies!  Talk about the power of connection – Ritchie attracted some of his friends who brought their friends, ending up with a team of International players – a team that got thrown out of all the Kent leagues for being too good!

The biggest rule in the club now is that nobody refuses a request for an autograph or photograph… and in the 90s, the team coach wasn’t allowed to pass a pub without having a pint on the way to a game.  Ah, the Good Life!

Whilst Lashings is a business, it’s a business vehicle for fundraising, and covers a wide range of sporting events outside the realm of Cricket Legends.  Small to medium-sized charities are supported locally, with an impressive track-record of scoring hits for these worthy causes.

Hot off the Press

Hot off the press, Dave announced the 2020 Cricket Day in Bournemouth supporting Macmillan Care.  Champagne, strawberries, and entertainment are guaranteed.  Connect with Dave to be assured of the early bird discount. 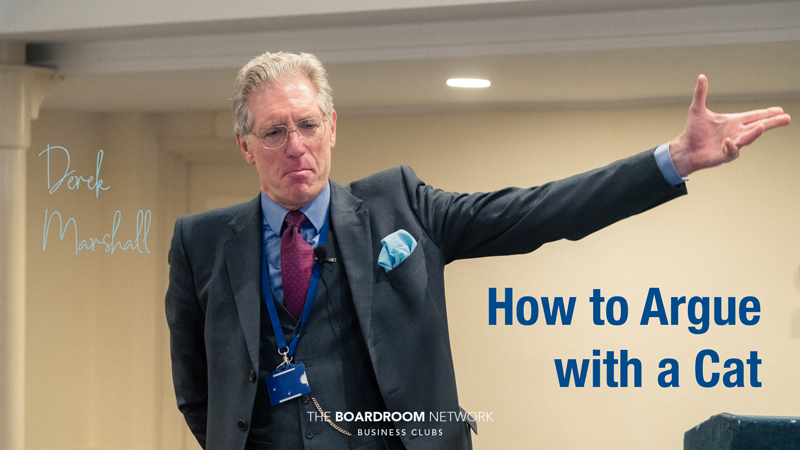 How to Argue with a Cat

Covering insights from Aristotle and the lost opportunity for mortal combat, Derek Marshall, Head of College Chambers, expanded on his frequent role in resolving conflict as a Civil Dispute Mediator.

There are three ways to resolve disputes – disputes being an inevitable result of business and family life.  The first way to resolve these issues is to litigate.  The advantage of this is that someone else takes the decision for you.  The disadvantage is that someone else takes the decision for you!  It’s unlikely to be a win-win since at least one person is going to be upset by the result, and often both parties!  It’s extremely expensive, extremely unpredictable in terms of the outcome, lasts a long, long time, and the Court System is cheerfully breaking down – with every chance that your hearing will be deferred time and time again due to lack of Judges.

Method number two was much more entertaining but unfortunately illegal: Trial by Combat.  No more Maximus!

Method number three is resolution by Civil Dispute Mediation – a skill and service that takes up a third of Derek’s time.  Boards, buildings and border disputes have all fallen under this remit, as well as disputed Wills.  One notable Will dispute had been dragging on for 12 years before well-structured mediation saved the day.

For me, the key points were to seek mediation early on in the dispute.  This saves time, saves costs, and is far more likely to produce a predictable win-win outcome.  Donning his Spice Girls hat, Derek begins with finding out, not what the parties want, but what they really, really want!

Getting people from A to B without remaining stuck at position A is a challenge on a par with getting your cat into a box, ready to visit the Vet.  Citing one of his favourite books, “How to Argue with a Cat,” by Jay Heinrichs, Derek has us all laughing at the vision of trying to get our loveable pet ready for transport to the Vets.  The transformation, of course, is outstanding.  Purring Pussums is metamorphosed into a demonic fiend – replete with claws and wrath worthy of the former trial by combat scenario.

To avoid permanent physical disfigurement, the wise Cat-Owner will leave an open box next to a low coffee table and a pile of cushions, allowing the cat’s natural curiosity to defeat its resistance!  The idea goes back to Aristotle’s treatise on Rhetoric.  To persuade people you must show them a lure, a reward, but also the route to the reward.  To scale the mountain there must be a plan, a route, and rapport in the relationships.  Shouting at the parties, “For goodness sake, get up the mountain!” won’t work!

A good mediator will show the parties the route, the series of steps, leading them to a reach their own conclusion – albeit via a strongly guided path!  Most mediations succeed.  The first step is the positive sign of parties turning up for mediation.

“I’ll see you in my Chambers…”

Thus, if you know of someone facing a disputed situation, having a chat with College Chambers is an effective foundation for engaging people in what is likely to be a successful and manageable step-by-step process.  The outcome will be a deal each party can live with and move on – a far more effective result than the unpredictable outcomes of running the case to trial.

From Disco Dancing to Aristotle, our events certainly surpass assumptions of what will be experienced next… but then, “Everything is connected!”

Book Recommendation:
How to Argue with a Cat https://amzn.to/35gohYO