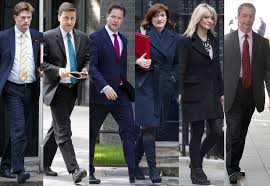 Alex Salmond stated that last night the Scottish Lion roared. Well it did, but nowhere nearly as loud as St George! The Yeoman of England or is it Yoeperson now, shouted: if you are offering an SNP-Labour alliance we are not going to governed by the Scots, and voted in large numbers for the Conservatives.

At the Siddall household we had placed our predictions at 315 for Conservatives and only 20 for the Liberals.

What are the Key trends.

The SNP have won Scotland, totally predictable in my view.  Once the issue of Union has been removed from the table would you not think SNP would represent you better than the other two parties if you are Scottish?

The Liberals are history. Even the great Anti-Business Secretary lost his seat. They can now be ignored as a political force. They were the anti-establishment vote which was lost when they were in Government. As a consequence their vote has divided.

Conservatives won large parts of England outside London, and the Northern Cities. This is a rejection of the mad economic policies of the Labour party, but also the English hatred of the SNP. It was the gossip with many people I talked to: ‘we must keep the SNP out’.

UKIP: who cares? Once the referendum on Europe happens they will disappear.

One question is why London bucked this trend. My instinct is that Non Doms have driven up house prices in London and Labour’s commitment to pushing them out by taxing them highly struck a chord here.

Why did the opinion polls get it so wrong?  In fact, in straight percentage terms they were not wrong. What they failed to judge was the local variations, and the effect of the first past the post system.

Obviously, Cameron will form a Government. At the time of writing it was not clear whether a minority or majority.

A referendum on Europe will happen.

Scotland will get more powers including tax raising powers. It is obvious that Scottish people have voted for higher taxation, whether they realise it or not.

The big questions that really need to be resolved:

How can a party that comes third (UKIP) have 1 MP and the one that comes 5th in percentage votes gets 55 seats?

But bigger: what the issues will be for English votes?.The SNP will be awarded certain laws that apply only to Scotland. This is a certain outcome. One of which will be the ability to raise taxes from only the Scottish people and this they will certainly do.

What in my opinion will then happen is that the SNP will be excluded on voting in Parliament on these issues. I cannot see how this will not happen. English votes for English people.

The result is that for a large part of the issues going through Parliament the SNP will have to abstain. This gives the Conservatives an effective Majority of an additional 55 on all English issues.

It is only UK issues i.e. defence, budget etc. that will be for the whole Parliament.

For the next 5 years the UK will be a federal country. They say Edinburgh is the Athens of the North, and the SNP are going to try and enhance the reputation.

The lesson of history: Don’t anger the English Shires!