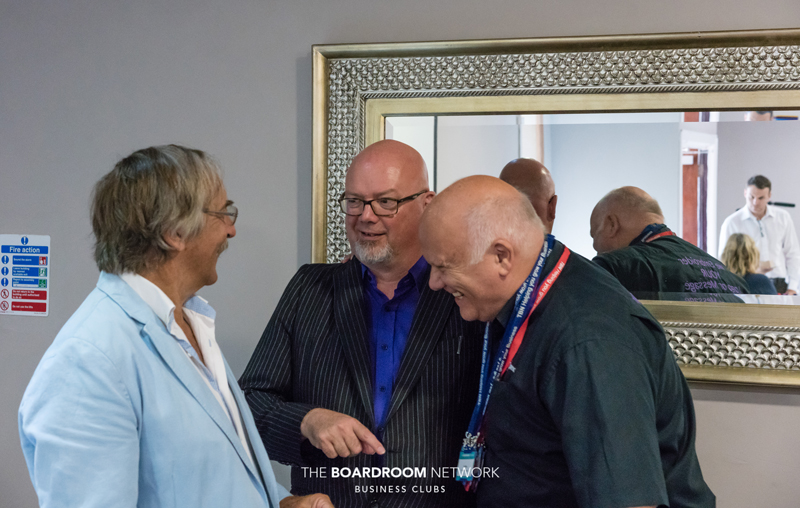 For holiday season, I’d have to say we were delighted by the scale of the turnout for our Bournemouth TBN – even with room changes, venue brand changes, and the joys of parking in peak tourist season.  Our four speakers dished up a diverse menu of delights from the benefits of playing bridge through to boxing for the Navy!  Knockout!

A Passion for Bridge

After 38 years in Financial Services, Chris Mower sold his company.  That was 3 years ago.

Two years ago, Chris, spoke to his daughter, who can’t wait to get out of bed in the morning because she has such a passion for her job.  This was not how Chris felt about his long career in finance.

She said, “Dad, just go and follow your passion.”

Chris’ passion is Bridge.  He began and played as a teenager, let it lapse for years when ‘life got in the way’ – took it up 7 years ago, going on a beginners’ course.  He now partners with an International Bridge Player… who asked him whether or not he would like to help him teach Bridge.

Together, they now have over 200 students.

Warren Buffett “Bridge is such a sensational game, that I wouldn’t mind being in jail if I had three cell-mates, who were decent players, who would be willing to keep the game going 24 hours a day.”

So, why would you want to learn to play Bridge?

¼ Billion people play it worldwide!  That’s quite a lot of social proof – more than every other card game put together.

Business people tend to like it because it takes your mind off your worries – you can’t think of anything else while you’re playing.

Our members who have enjoyed the training so far include Brendan Carroll – showing how happy he is – and Tony Raybould is booked on.

It could be life-changing.

Google ‘West Hants Bridge’, to see how to take one of the 11 places left on the forthcoming course. 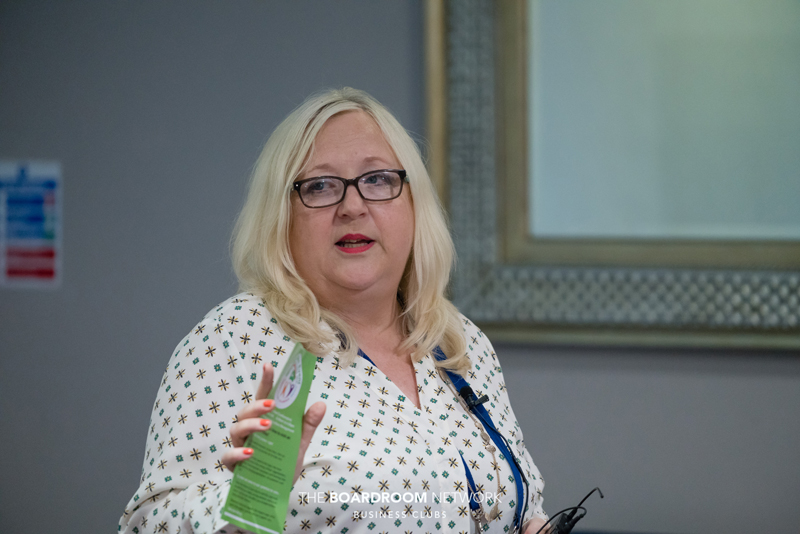 Lynda Daniels, from the Southern Sustainability Partnership, sharing details about The Big Green Event. This is coming up on 2ndOctober at the Ageas Bowl – just up the motorway.

Good news: TBN Members get a Free coffee in the Eco Coffee Lounge when we visit the event.  Plus, there are free workshops, influential keynote speakers, multiple exhibits to look at – so what’s not to love about this opportunity?

With Lynda’s clever reverse-logic expressed humorously, we now all know that this really IS for us all. In its third year, our support makes a huge difference to the viability of running this event each year.  Let’s show our support. 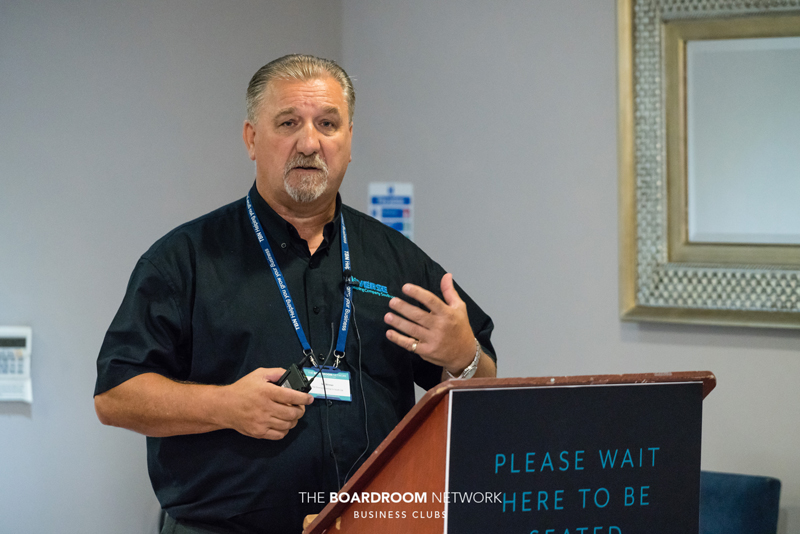 As a youngster, playing sport was all about winning, scoring the goal, hitting the winning runs, serving those aces – all about the end result.

Ian, serving in the Royal Navy, he became a Royal Navy Boxer – selected to fight against the Army and the Marines – about 8 stone ago.  It takes a lot of training, developing a system.  Ian’s coach called this system his training process.  He had to get to a point where he wasn’t afraid to get hit in the face.

His coach believed in Ian and had confidence in the results.  In fact, Ian’s strategy knocked one of his key opponents out quickly – so he didn’t get hurt.

In sales, people want to get the results without putting the hard work in – going for the knockout punch without the process steps.  It’s all about the sale, isn’t it?  Perhaps. It is, however, most definitely about a longer process.  From Ian’s former presentation on the fishing process, we already know it’s about the right fish, with the right bait, in the right pond, with the right rod.  Moving to a more general approach, the process can include:

Ian chose to focus on the nurturing.

This is where a relationship moves from potential to actual, from anticipation to expectation – an expectation that you can give them so much more than you have just spoken about.

Ian’s offerings have moved from 1 of 2 services to 1 of 9 services – to maximise the value of the existing relationships with customers who already trust you.  Apple and Amazon are great examples of companies who started with a narrow product offering, and then broadened the range of what they offered once that trust was in place.  These are great examples of where Brand loyalty can then drive expansion of the portfolio.

1997 was the beginning of Ian’s company – doing deep cleaning for kitchens.  Customers asked Ian whether they could do other things.  There was a natural progression to other diverse cleaning services.

Now Ian is expanding online, and into event management – specifically, education for the sectors he can speak authoritatively into.

The challenge is not to go out and get the sale – that’s relatively easy.  The more important aspect is thinking about how to show loyalty to those customers who have shown you loyalty.  It’s all about keeping the customers… and offering them more choice and value.

How are you going to keep the customers you’ve got? 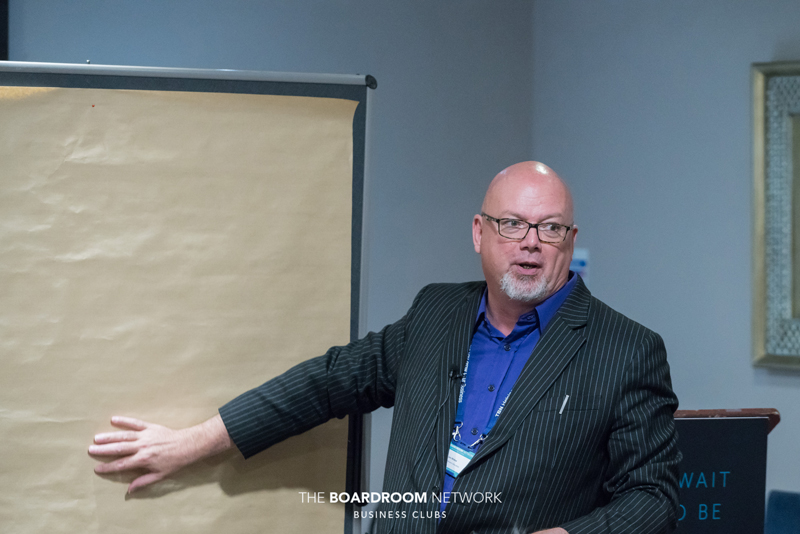 I finished our educational portion with a brief share of a back-of-the-napkin technique I call, “The Breakthrough Triangle.”

This technique can be used for any process – professional or personal – that flows through time.

How do you do it?  Easy!  Draw a triangle on a scrap of paper like a napkin.  In the middle of the triangle, write the element you wish to focus upon. Personal things might be ‘shopping’ or even ‘the weekend’.  Professional things might include a particular marketing or promotional campaign or even something as powerfully relevant as your next networking meeting.

The sides of the triangle always bear the same three words: 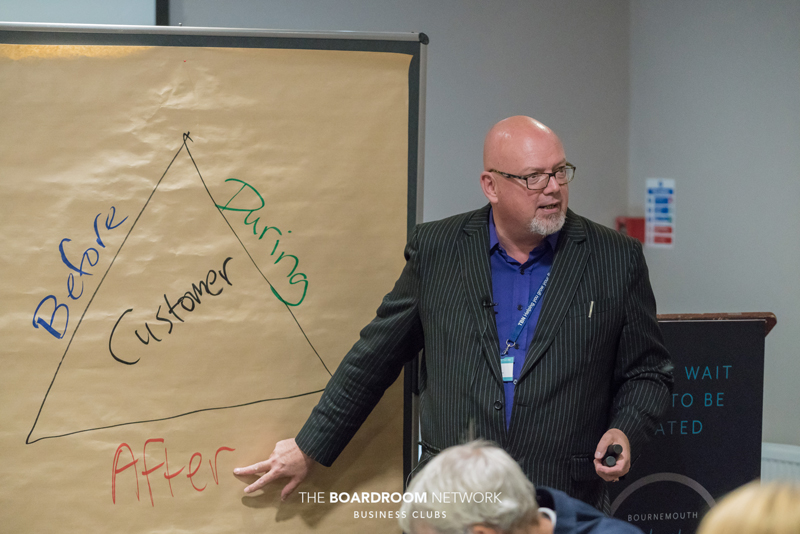 It’s really helpful to arbitrarily give each of these three headings equal value in the process.  For networking, it’s great to assume that your preparation before the event has as much impact as the ‘during’ – the event itself. An even easier one to believe is that at least one third of the quality of the results you get from networking will depend on the success of your follow-up.

So here’s my challenge, to invest as much effort before and after our networking events as you do in the actual events themselves… and with the same degree of passion that TBN is known for.  What could you do to prepare more effectively for the next event?  Who would you want a 1 to 1 with?  And after… how could you lift your follow-up process to world class?

The Breakthrough Triangle is just one of one hundred practical strategies in our new book, “100% Improved Networking.”  The book is being crowdfunded by members and friends who are getting the content as soon as it is written – through a secret Facebook group for the first 100 partners only. If you fancy jumping into that stream of inspiration – and networking with the most enthusiastic business professionals I know, let’s chat!